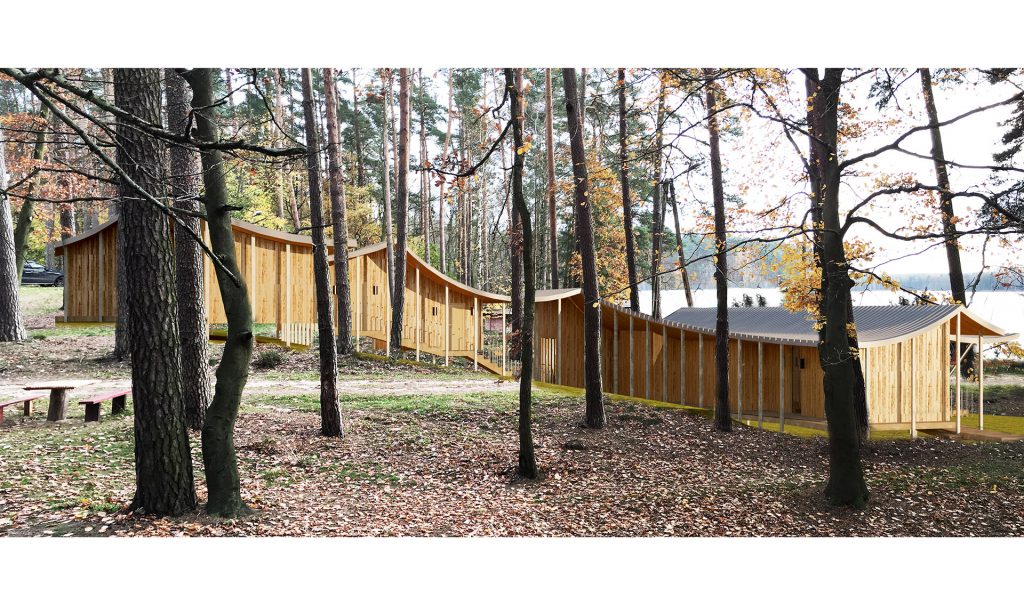 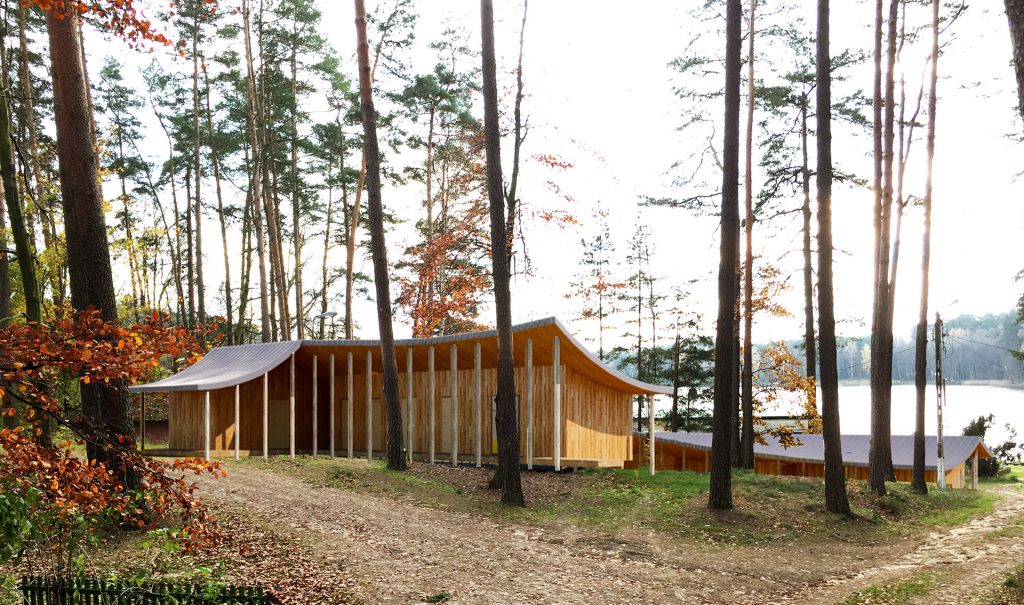 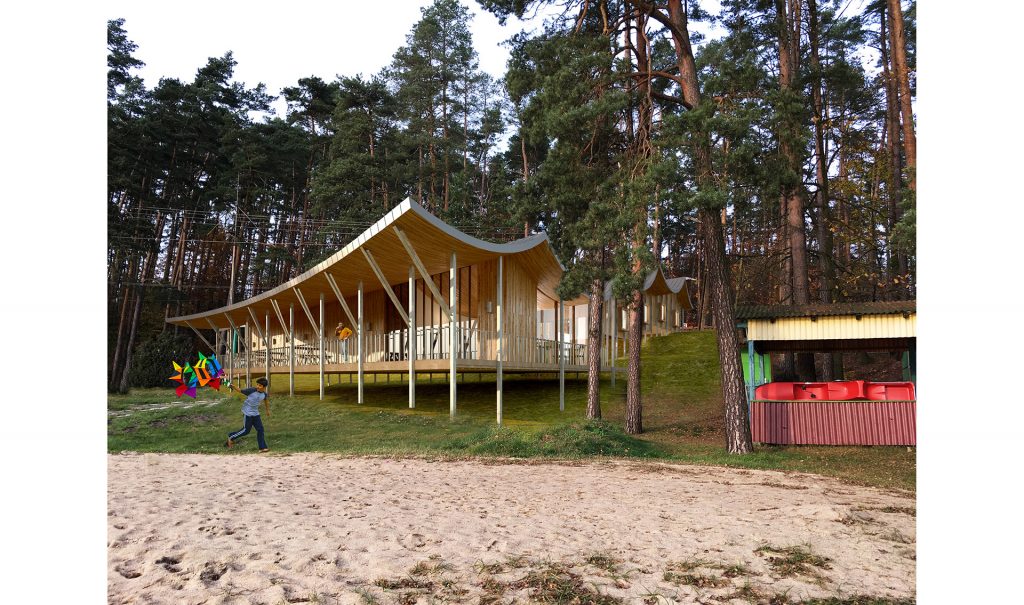 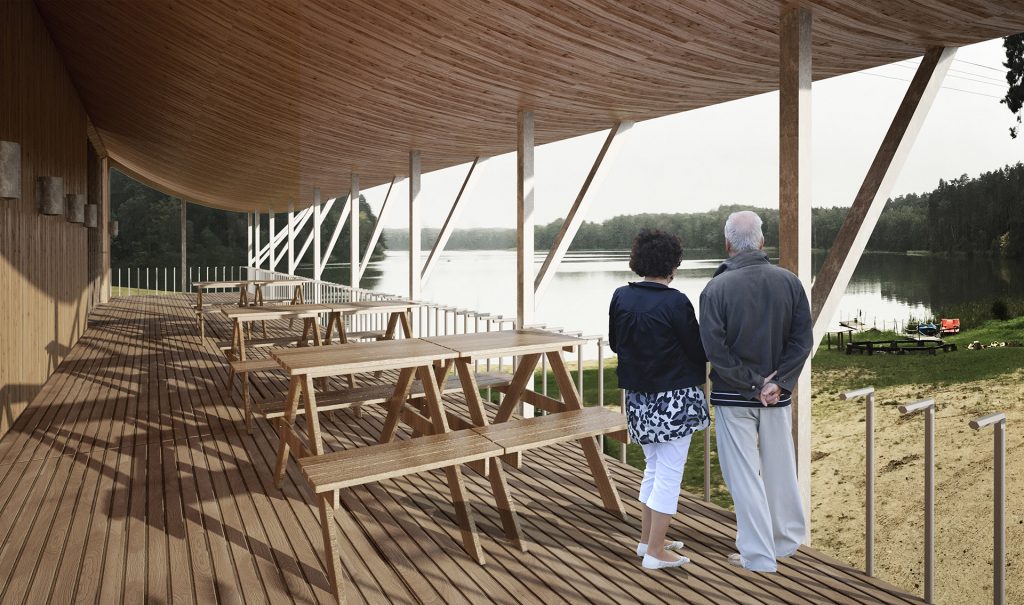 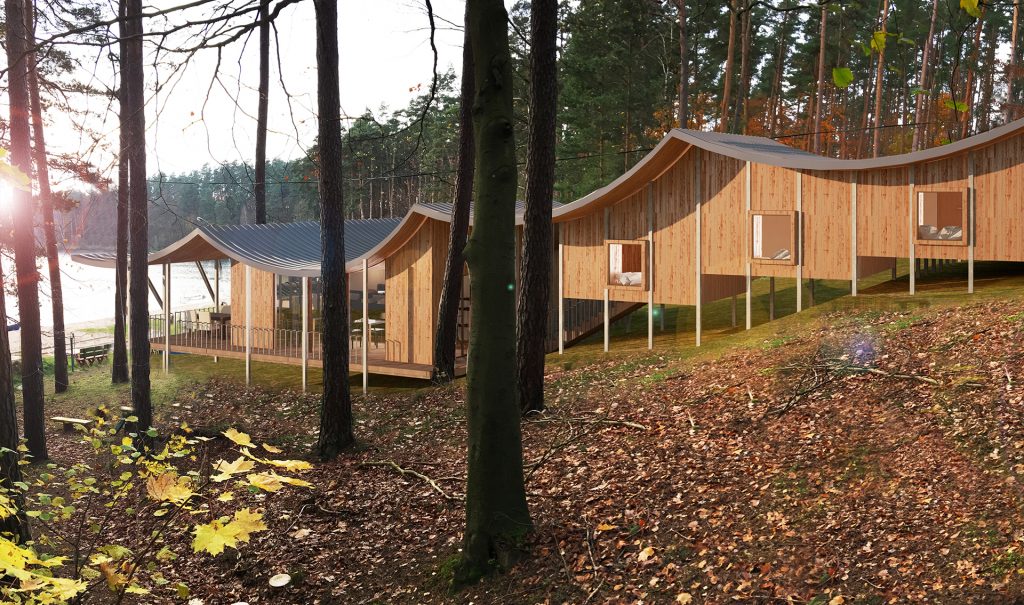 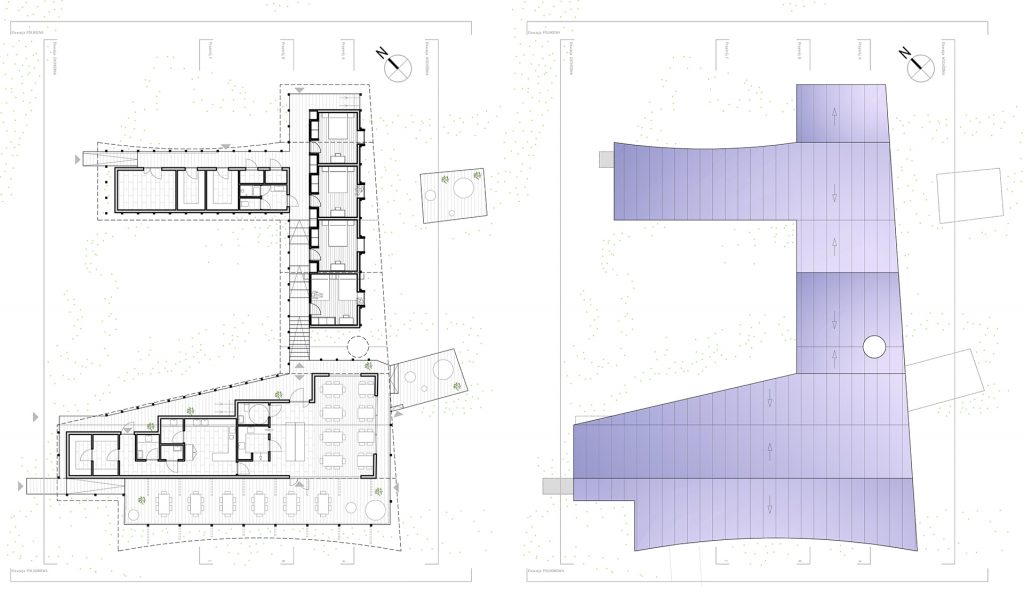 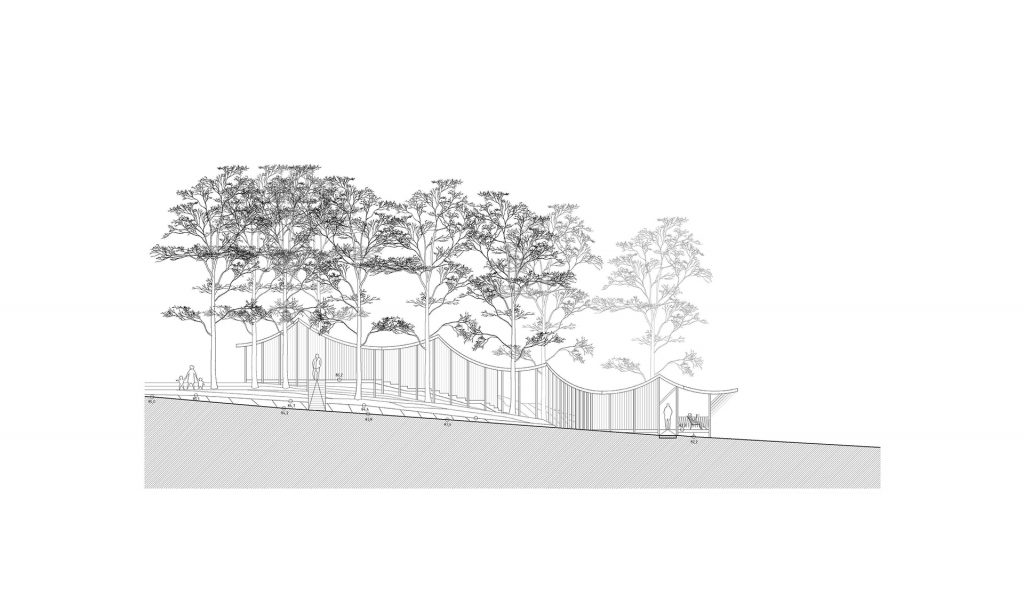 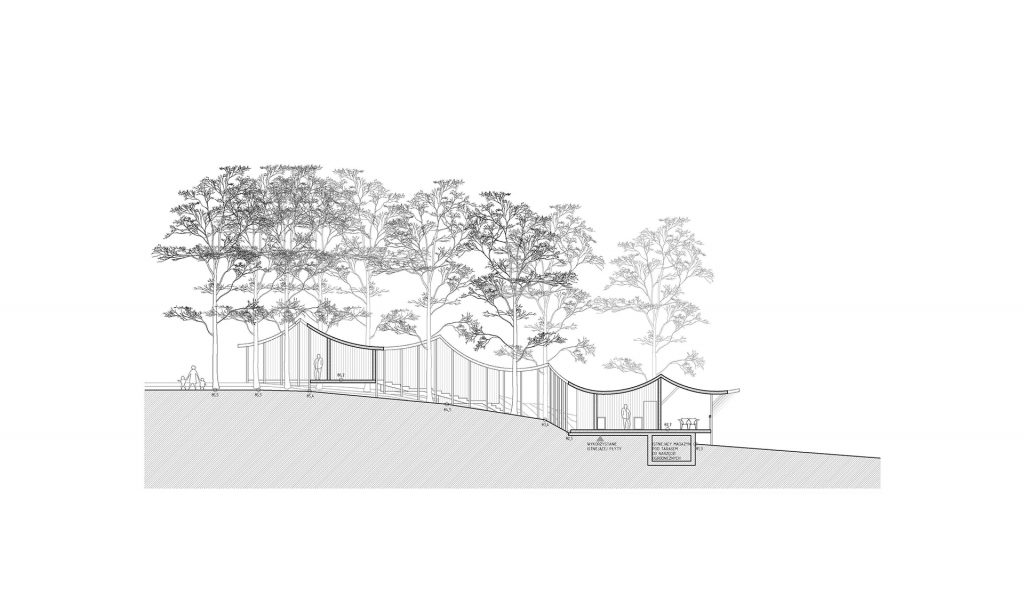 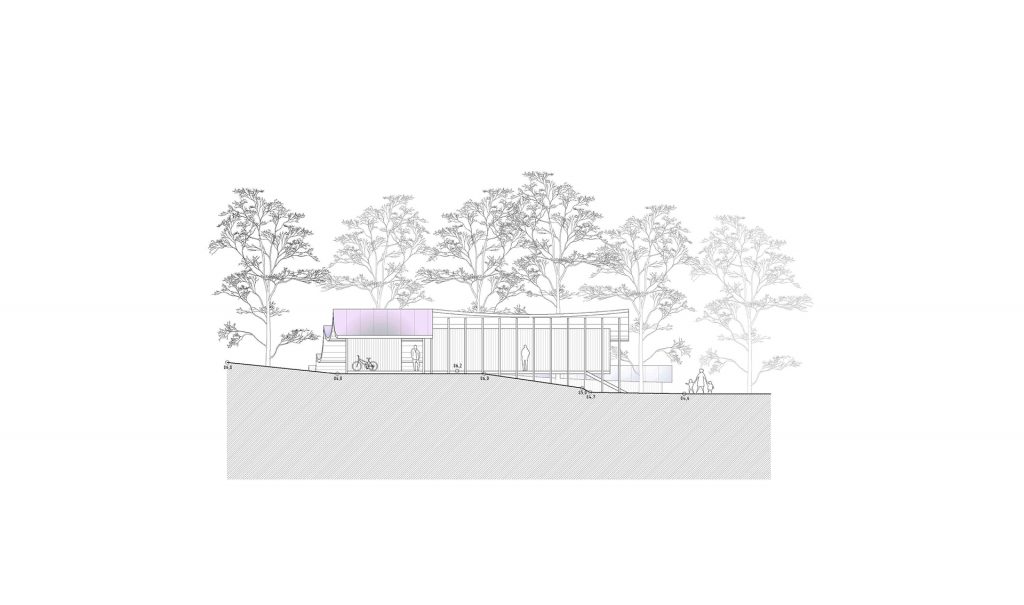 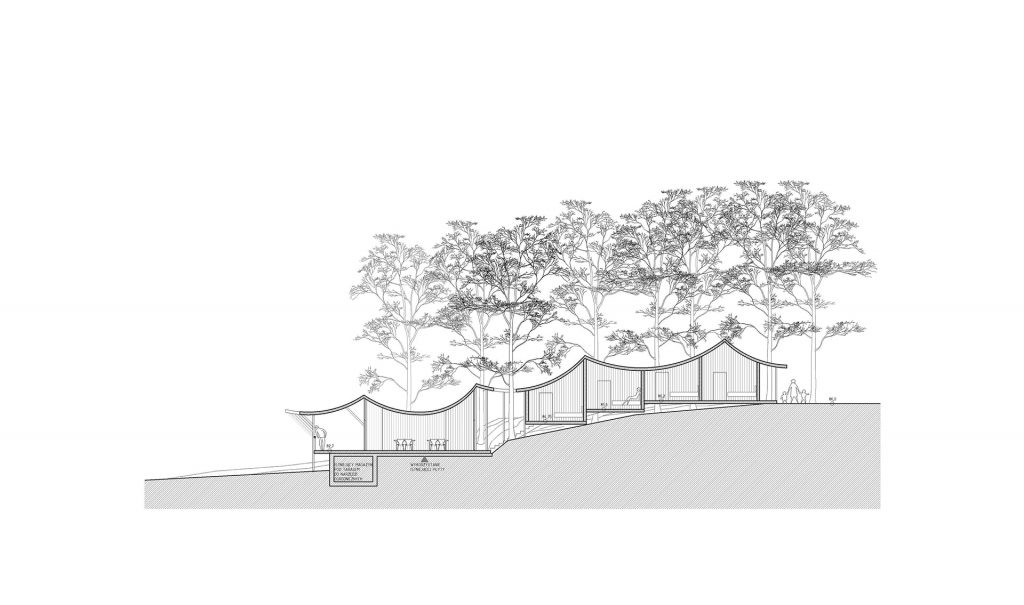 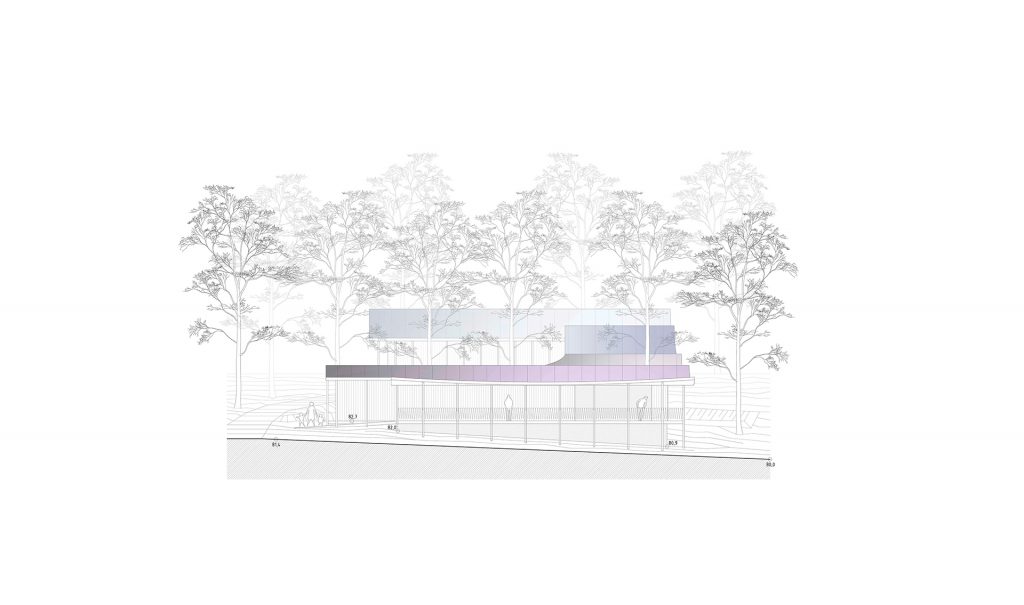 Social Building and 3 cottages. Self-developed for own use and tourist exploitation

The Polish food company Cedrob has a holiday resort that dates back to the communist 1960s and welcomes employees who want to spend their holidays between April and October. It’s a centre halfway between a resort and a campsite and consists of 17 tiny cabins and a small social centre, being its main attraction the location in a pine forest sloping on the edge of Lake Wielkie Partęczyny. Given the antiquity of the complex, it is obsolete due to the small size of its constructions as well as its precarious construction and insulation, which do not allow it to be used all year round.

For all the above-mentioned reasons, the company decides to build: three new larger cabins whose prototype will serve to gradually replace the existing ones, a kayaks warehouse that replaces the current one, and as a main action a building that consists of three parts: one of several warehouses, another of bedrooms for employees and a third one that will replace the current one and that houses the social area and the kitchen that gives it service.

With the priority of not cutting down trees, the areas free of trees to build the main building take a U-shaped shape with three very different sides in terms of orientation, views, slopes, height in the land and places from which to access. Bearing in mind that functionally the ideal thing is to access them at ground level, it is decided not to stack the different uses in levels, but to assign each one the side of the U that best suits them.

So the place near the lake and therefore the lower side of the U is intended for the social area to maximize the enjoyment of the lake by guests. Both the entrance of clients to the terrace and the kitchen products are produced from the main path of the complex. There is also another entrance to the dining room from the forest.

The various warehouse area of the complex is located at the top of the U, with fewer views since it does not need them, and adjacent to the car park for quick access from it.

Finally, the sleeping area for employees occupies the middle side of the U, which absorbs the unevenness between the upper and lower parts of the building by means of stairways easily accessible to employees. This area has beautiful views of the forest which protects the privacy of the bedrooms.

As the building is sloping, a fundamental factor to be taken into account is the constant view of the roofs and their ceilings at the bottom, gaining those as much presence as the facades themselves.

This is why we propose a single roof with a strong presence that joins the three parts absorbing their different unevennesses produced by the terrain. Appealing to the collective memory, the roof takes on a form reminiscent of a camping tent but also the inverted roof of the typical Polish “Chata” cabin. This shape is a gabled roof with a convex curve that, by means of its repetition, climbs up a hillside parallel to the terrain. The wooden lower part and the metal upper part in Zinc are shown in the landscape in an alternative way, and are supported at the same time that they fly over a forest of thin metallic pillars. These give structural support to slabs and recessed facades although in reality the latter seem to hang from the roof. The facades and floors are also covered in wood as this is the typical building element in Polish forests. All this forms a familiar landscape parallel to the natural landscape formed by the forest and the lake.

Meanwhile, the cabins are located in three small openings in the forest in such a quincunx way that the views between them are not covered. They are the same between them and their construction system is the same as the main building, except that they have an ondulated sheet metal gabled roof with a rounded ridge. They have two separate volumes that house the private program with bedrooms and bathroom while the common space is central between these volumes and open to the landscape on two sides with views of the lake in front and the forest behind. The only enclosure of the central space are two large sliding windows in their entirety so that the common space could be considered as a large covered terrace when those are open. It also has a proper terrace on the front.